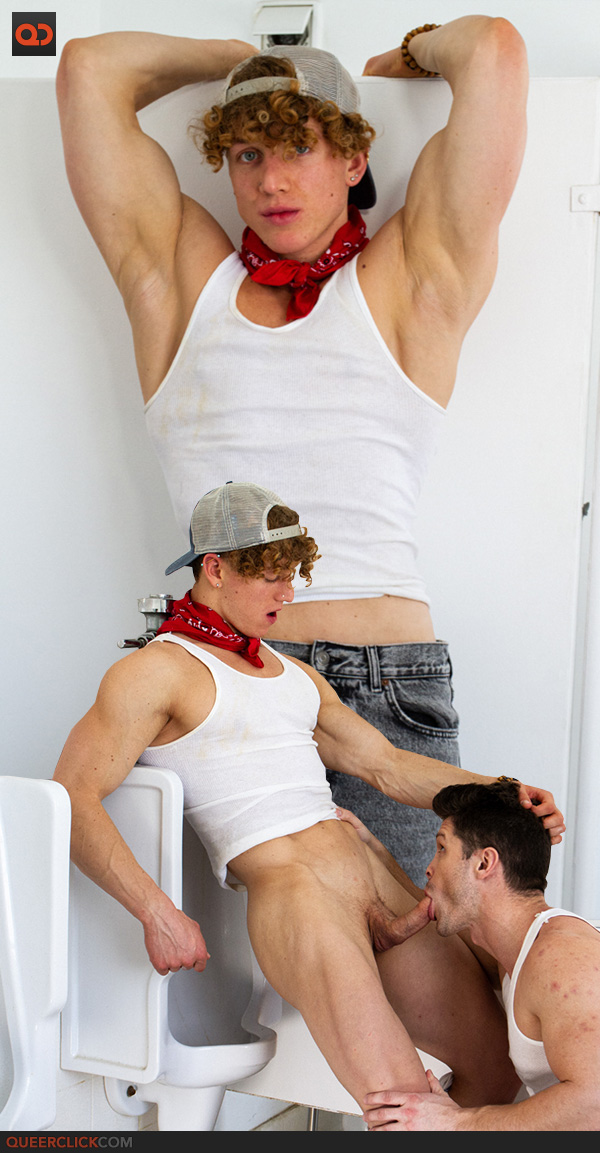 QueerClick would like to offer a warm welcome to both Anthony Duran and Jasun Mark, two of the members behind the amazing team who create, film and produce at Ducati Studios.

Anthony – I was working in fashion photography in my 20’s in LA. I met photographer Jeff Burton, who was the still photographer for Catalina Video, and I started assisting him shooting VHS box covers. That’s how long ago it was! When Jeff left to work for Falcon in the late 90’s, I kind of stepped into his position and… bam!… I then shot over 200 box covers and directed 50 films in my 5 years with Catalina Video. As soon as I was freelance I then shot for almost every studio that was on the West Coast and landed a gig Directing for Falcon Studios “Jocks” line. I’ve been very lucky to work with some of the most talented performers and crew in the industry.

Anthony – My favorite scene was Jack Dixon and Dale Savage called “DILFS Fucking” for Nasty Daddy. I thought it was the perfect combination of hairy muscle daddy paired with suburban dad next door type. Hot and fun and the chemistry was off the charts. Tit Pig aka Steve Hurly was the inspiration for Nastydaddy, I loved every scene I shot with that Legend. RIP Buddy

Jasun – Wow… hard to choose! The scene that’s popped into my mind from recent days is “Shave And A Haircut Two Dicks” that I directed for Trailer Trash Boys recently. Trailer Trash Boys is a very different kind of site. It’s
comedy but it’s also sort of theater of the absurd. We spend a lot of time making up dialogue and improving the lines. We let the guys do it over and over again until we’re all laughing too hard to actually make a porn LOL! Then we know we have the B-Roll done and it’s time for the “meat and potatoes” part. Brian (Bonds) and Masyn (Thorn) were SO funny and the crew kept bursting out laughing and the sex was so hot too. The setup was really funny…in fact the thole thing is, but then you have these two stunning country boys fucking and it’s like… perfect. I felt so proud of that one.

Anthony – I was mostly focused on photography… directing and production was a natural progression for me. I’ve always loved making men look hot and sexy.

Jasun – Haha… ok well… to be fair I’ve been on camera like 5 times. And once was as a favor for Anthony 😉

Anthony – yeah, Jasun was one of the original Nasty Daddies!

Jasun – I still can’t believe you talked me into that haha! But the rest of the question is that yes, I’ve always wanted to make movies.

Jasun – Joe Gage. I mean… any gen X gay guy grew up and he was like… God. I loved his movies and the way he created his characters. His way of shooting, his movies were so hot. When I finally got to work with him it was like… amazing… but also a bit scary. You don’t wanna fuck up in front of your idol. But we’ve worked together many times now and he calls me his “protege” so… I’ll take that.

Anthony – I studied photography at LA Trade Tech in Los Angeles. And Josh Elliot guided my career. We had so many great times together. He was trained by the legend William Higgins.

Jasun – I studied film at York.

Anthony – My partner Trenton Ducati was one of the industry leaders who helped get proper testing before shooting so we could all keep working. He was focused on the safety of the cast and crew. We would all test and then quarantine before and after shoots. None of us ever tested positive.

Jasun – I mean we had to, really, didn’t we? We had to stop shooting until we learned more about how to prevent spreading COVID. The safety of our stars is the top concern. So yeah.. it was months before we were working again. We had all sorts of health experts weigh in and come up with guidelines. We had a lot of precautions. There were a couple stars I worked with more than once who had no idea what I actually looked like because they never saw me without a mask for the whole time we were shooting the movie. We had to do daily testing. Distancing. But nobody was infected on a set I worked on. So that’s good.

Anthony – The adult industry has always been ahead of the game with cameras and tech. I’m learning new stuff every couple of years. Everyone is all about 4k now and we are now shooting 4k for all our sites.

Anthony – We are so happy for the actors being able to create there own content. We will often share a scene we shot with the actors for their fans sites. It’s a win win for everyone.

Jasun – Are you kidding? It’s made it better. The stars now have some skin in the game. They show up totally ready to do a scene, they’re professional and they understand how the business works and how to make it all work.
It’s been a huge boost.

Jasun – So far mostly just more amateur content out there. You can’t expect to litter the streets with paint brushes and expect everyone to paint the Mona Lisa. Film making isn’t something easy to do, it isn’t just having a camera. But I do see your point and yeah, it certainly has put those tools in more hands and that’s a good thing.

Anthony – Stay focused and have a great time. So many people would love to give the industry a try. It can be an amazing experience.

Jasun – No, not really. I think all things considered I’m happy with just about all of it. As far as advice goes… make movies that would turn you on.

Anthony – We have lots of ideas, we are currently working on another new site and QueerClick readers will be the first to know!

Anthony – Thanks to all the QueerClick readers for all the support. We want to hear from them? Let us know who or what you want to see on the sites ? You’re all very welcome to leave your ideas and comments below…

Jasun – Thanks so much for the support. Seeing how people enjoy what we’re doing has been such a rush!

Many thanks to Anthony and Jasun for taking time out of their busy production schedule for such an interesting and insightful interview! Dear QC readers please feel free to leave your comments, ideas and appreciation in our comments section below.